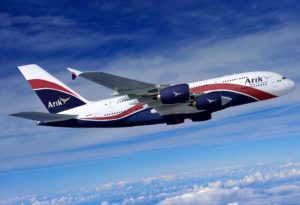 The managements of the Federal Airports Authority of Nigeria (FAAN), the Nigerian Airspace Management Agency (NAMA) and the Arik Air Group have been given two weeks within which to resolve all issues relating to indebtedness between the respective organizations.
Minister of State for Aviation, Senator Hadi Sirika who gave the directive at a meeting with the management of Arik Air in his office Thursday, directed the parties to report back to him after the two week period with a resolution on amounts owed, payment plans and the way going forward.
According to the Minister, the issue of alleged indebtedness by Arik Air which has led to disagreements with some trade unions within the regulatory agencies was highly regrettable, adding that while government will not condone lawlessness within the industry, all airline operators must conform to industry rules and regulations. These he said, include the payment of applicable fees and fines as at when due.
Sirika also told the delegation that the well-being of an airline is measured by its ability to pay for services rendered to it
Sirika said the goal of the present government is to develop an aviation industry that is founded on the principles of safety and security of not only the regulators and airline operators, but also passengers and their luggage, while also putting in place polices that would encourage the growth of domestic airlines.
“While i will go beyond my limits to ensure that domestic airlines are encouraged to grow and promoted to compete favourably with their foreign counterparts, I will not subvert applicable rules and regulations in favour of any” said Sirika
The Minister further said that Aviation is the only industry that is internationally regulated and that Nigerian operators must conform to international best practices, saying that Arik Air and other key players need to be supported for wider international visibility.
Earlier, the Chairman of Arik Air, Sir Arumeni Johnson decried the regularity and impunity with which trade unions operating at the airports disrupt the airline’s operations under the guise of its indebtedness to their organizations, saying that such practices, if not stopped by the authorities, was capable of running down the industry.
He described his airline as a responsible corporate citizen that is always ready to meet its obligations to its passengers and service providers and therefore does not deserve the shabby treatment by the Unions as exemplified by the recent picketing of its offices and aircrafts at the Murtala Muhammed International Airport in Lagos.
“Is it now the duty of the union to seek payment of money owed aviation agencies? The union has clearly gone beyond its mandate and we implore the Honourable Minister to intervene” Arumeni told the Minister.
The Chairman expressed the hope that Sirika as a thoroughbred aviation professional would bring his wealth of experience to bear in resolving all the lingering issues especially between airline operators and the industry regulators.
James Odaudu
Deputy Director, Press & Public Affairs