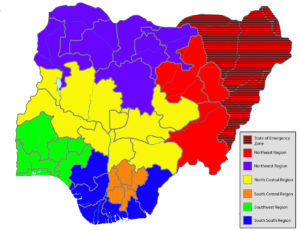 As part of its efforts at commencing the implementation of the Youth Empowerment Programme in the North East, the Secretary of the Presidential Initiative for the North East (PINE), Mr. Umar M. Gulani and officials pays a courtesy visit to the Ag. Director General, National Directorate of Employment (NDE), Mr. Kunle Bayana in his office. Mr, Gulani chronicled the establishment of PINE as a soft approach of government at alleviating the sufferings of the people of the North East. He said PINE’s intervention is strategic and well planned.
He enumerated the intervention done so far in the building and renovation of Police formations, Schools and Hospitals across Adamawa, Bauchi, and Yobe States and informed further that the short term approach of PINE is aimed at jump-starting the economy of the North East. He said PINE has come to seek collaboration and guidance in the areas of youth empowerment, skills acquisition and productive works and to leverage on the existing structures of NDE as a critical organisation empowered in these areas.
In his response, Ag Director General, National Directorate of Employment (NDE), Mr. Kunle Bayana acknowledge the fact that NDE has been working closely with PINE and is conversant with the activities of PINE stating further that a staff  of NDE is in a sub-committee of PINE. He said efforts at revitalising the North East cannot be over emphasised considering the enormous economic support the North East has been giving the nation before the insurgency. He pledges the cooperation of NDE, saying all components and quick win schemes are available for PINE to explore. He concluded by assuring that an articulated documentation of NDE interventions, structures and technical support will be made available to PINE in the pursuit of its programme.
Odutayo Oluseyi
Communications Officer, PINE.

Insurgency as Neocolonialism in Nigeria

Service Chiefs and Sallah Feast for Troops: A Post-Mortem

Of Oil Firms’ Disdain for N/Delta and Military Intervention

Security Forces and Fixing the Gordian Knot of Insecurity