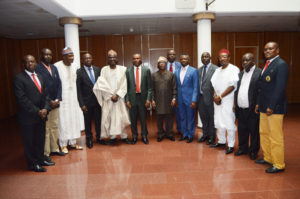 The Committee set up by the Minister of Niger Delta Affairs, Pastor Usani Uguru Usani to audit all the projects of the Ministry in the nine oil producing states of the Niger Delta region, submitted its report in Abuja, on Tuesday.
Pastor Usani, while receiving the report from the Committee, said the report was not to witch-hunt anybody but just to ensure transparency, accountability and to see that the various projects of the Ministry serve the purposes for which they were put in place, for the benefits of the Niger Delta people.
“The origin of this audit committee was based on the discovery that things were not done properly, so the committee members were carefully selected to audit the projects,” he reiterated.
The Minister disclosed that the Ministry suspended all payments to contractors pending the outcome of the audit report being submitted by the Committee.
He stated that the report would be subjected to proper scrutiny and appropriate actions would be taken against contractors found wanting by the audit report.
In his remarks, the Minister of State, Niger Delta Affairs, Prof. Claudius Daramola thanked the Committee for a job well done, adding that all the projects being executed by the Ministry currently were all inherited projects.
In the same vein, the Permanent Secretary in the Ministry, Mr. Alo Willaims Nwankwo stated that the Ministry thought it wise to inaugurate the technical committee to inspect the quantity and quality of the projects of the Ministry in the Niger Delta region as a result of the determination of President Muhammadu Buhari administration’s resolve to ensure that things were done according to the extant rules in the country.
The Chairman of the Projects Audit Committee, Engineer Yerima Bulama, thanked the Management of the Ministry for the opportunity given to his committee to access the projects being undertaken by the Ministry since inception from 2009 to date in the Niger Delta region.
Yerima said part of the committee’s discoveries was that about seven hundred billion naira (700bn) worth of projects were being handled by Ministry since inception, out of which payment of about 400bn naira was made, as about 200bn was still required to complete all the projects.
The committee also observed that due process was not followed in awarding most of the contracts. The recommendation of the committee include the following: The ministry should ensure that future projects pass through proper procurement process; that a cost effective unit be established in the ministry and also that the federal government should guide against duplication of projects by government agencies in the Niger Delta region.
The 12 member technical audit committee was inaugurated by the Minister of Niger Delta Affairs, Pastor Usani Uguru Usani on April 8, 2016.
Signed
MARSHALL GUNDU
Director (Press)