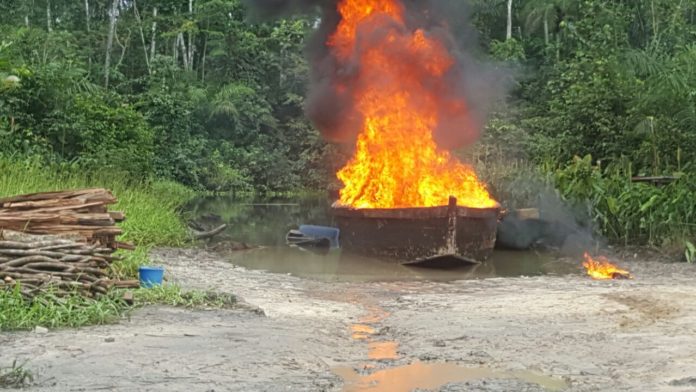 In line with the Chief of the Naval Staff’s drive to eliminate all forms of economic sabotage in the maritime domain, a naval patrol team deployed by the Forward Operations Base (FOB) ESCRAVOS in Delta State raided Sara Creek near ESCRAVOS. During the operation which were conducted on 7 September 2016, the team arrested 6 persons in connection with operating an illegal refinery. Three Cotonou boats laden with unquantified suspected stolen crude oil were destroyed in the process.
The patrol team also recovered one speed boat and a Cotonou boat carrying 15×10,000 liters and 2 x 5000 liters GP tanks laden with suspected illegally refined Automotive Gas Oil (AGO). Other items recovered are 3 outboard engines and 4 pumping machines. Similarly the patrol team deployed by NNS DELTA has arrested a Cotonou boat laden with 100 metric tons (MT) of product suspected to be illegally refined AGO. The boat was arrested on 7 September 2016 at Ogboro Creek in Warri South LGA of Delta State.

In a related development, a patrol team deployed by NNS DELTA on 3 September 2016 combed Benneth Island situated in Warri South LGA of Delta State. On arrival, the suspects fled as the team recovered 40 MT of Premium Motor Spirit (PMS), one pumping machine and some hoses with which the criminals operated.

Yet again, on 2 September 2016, a patrol team deployed by FOB ESCRAVOS located and destroyed an illegal refinery as well as a very large Cotonou boat laden with product suspected to be stolen crude oil. In the course of the operation one Mr Endurance Okogba Edirin was arrested for involvement in the operations of the illegal refinery and suspected crude oil theft in Ekpemu cooking camp at Ekpemu Creek in Warri South West LGA in Delta State. Some items recovered were 2 mobile phones, one pumping machine and hoses. In all the cases, investigations have commenced and the suspects would be promptly handed over to the prosecuting agencies for further action.

The Nigerian Navy is therefore appealing to the general public especially those with legitimate businesses in the maritime sector to avoid criminal acts as the service is willing, able and ready to carry out its constitutional mandate of protecting the economic assets of the Federal Republic of Nigeria.

You are please kindly requested to disseminate this information for the awareness of all.