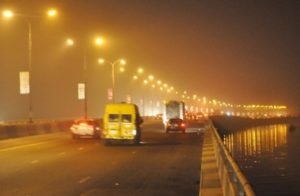 In its efforts to ensure safety of lives on Nigerian roads, the Federal Government has embarked on lighting of bridges with Murtala Mohammed Bridge (MMB), in Lokoja, Kogi State.
The lightening ceremony was performed by the officials from the Ministry led by the Deputy Director (Electrical and General Services), Engr. Saka Odufuwa, at the bridge site Lokoja recently.
The bridge which was constructed under the then Head of State, General Olusegun Obasanjo, was named after the former Head of State General Murtala Mohammed who was assassinated in a bloody coup in February 13, 1976.
Murtala Mohammed Bridge is located in Jamata district in Lokoja Local Government area of Kogi State. It is 1.76km long and 20m wide. The facilities on the bridge include:  pedestrian walkway at both sides measuring 2.0m wide, it has two demarcated lanes  measuring 8.0m wide in each lane. The bridge also has 44 electric poles with 22 poles on each side.
The bridge lies between latitude 08002’30’N and 08004’10’N of the equator and between longitude 06044’00’E and 06046’50’E of the Greenwich meridian. It links Lokoja and Koton Karfe Local Government of Kogi State, and it is a major  link, connecting the South-western Nigeria with the Federal Capital,  Abuja and the Northern parts of Nigeria.
Engr. Saka Odufuwa said the major reason for installing the light on the bridge is for safety purpose and that when the installation was initially done, the light was powered with solar panel. He stated further that in order to forestall the initial problem of using solar panel, the   ministry deem it fit to power the light with generator. Two power generating sets with capacities of 60kv and 40kv were procured with the aim of working alternatively between the hours of 7.00pm and 6.00am on daily basis.
Again, Engr. Odufuwa said that, government has arrangements on how the following bridges would be provided with light. The bridges are: Jebba Bridge in Kwara State, Markudi Bridge in Benue State, Katsina Ala Bridge also in Benue State and Numa Bridge in Adamawa State. He added that as soon as those bridges are being installed with lights, the commissioning will immediately take place.
Some motorists interviewed after the bridge was lighted commended the government initiative, “while approaching the bridge, the light signaled that I am moving closer to the bridge, unlike before when no one knows that the bridge is ahead” said one of the drivers that ply the road almost on daily basis. He called on government to extend the gesture to other parts of Nigeria where necessary. Others urged the government not to relent in its efforts by making lives easy for the citizens.
Olusegun Ogunkayode
Senior Information Officer
for: Director (Information)