Home Economy Budget Padding: Sanctioned “Padders” are Back to Work in Ministry 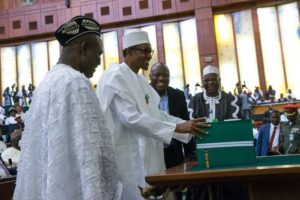 Budget Padding: President Muhammadu Buhari’s avowed determination to punish culprits who smuggled foreign items into the 2016 budget and who caused both national and international embarrassment are back to work, Economic Confidential can report.
Investigation by the Economic Intelligence Magazine indicates that the officials who were sanctioned by their deployment outside Federal Ministry of Finance have since resumed duties in the same Ministry without the highly publicized punishment the President promised while speaking to Nigerians resident in Saudi Arabia.
President Muhammadu Buhari had in February this year while speaking in Saudi Arabia threatened to punish all those who were involved in the padding of the budget.
Apart from the removal of Director General of Budget Office and deployment of several directors and senior officials from the Ministry, President Buhari also merged the budget office with the Ministry of Planning.
About 15 senior officials from other Ministries and Departments were posted to the Budget Office to replace the sanctioned officials that were recalled to Office of the Head of Civil Service of the Federation.
Other Ministries involved in the un-wholesome attitudes include but not limited to Federal Ministry of Finance, Federal Ministry of Education, Health, Agriculture and Rural Development, Trade and Investment, and Interior Ministry.
Meanwhile, Economic Confidential learnt that there has been an unhealthy rivalry between the Ministry of Finance and the Budget and Planning Ministry which are under the supervision of Kemi Adeosun and Udo Udoma respectively over who should superintend over budget processes and implementations in the country.
The development has no doubt created frictions between the two ministries and lack of the needed synergy required by both to put up a forward looking national budget. In view of these concerns, some departments have been created in the Federal Ministry of Finance that play critical roles on budget implementation. The departments include: Cash Management, Special Projects and Technical Services, bringing the total departments in the Ministry to more than 10. Some of the sanctioned officials are said to be performing strategic roles on the nation’s economy in these departments.
Recall that President Muhammadu Buhari has vowed that all those involved in the padding of the 2016 National Budget, which led to the discrepancies in the document, would face the most severe punishment.
He said the alterations, which he described as embarrassing and disappointing, made the document, which was debated in the National Assembly, completely different from what was prepared by the Ministry of Budget and National Planning.
In a statement, then by his Special Adviser on Media and Publicity, Mr. Femi Adesina, the President spoke in Riyadh while addressing the Nigerian community in Saudi Arabia.
The President was said to have condemned the distortion of the budget proposals by those he called entrenched interests.
Buhari stated that since he had been holding public offices, he had never heard about budget padding before the current incident.
He regretted that the unauthorized alterations had completely changed the document from the one he presented to the National Assembly.
The President, however, gave the Minister of Budget and National Planning, Udo Udoma, a clean bill of health, saying he did a good job.
Buhari said, “The culprits will not go unpunished. I have been a military governor, petroleum minister, military Head of State and headed the Petroleum Trust Fund.
“Never had I heard the words budget padding. Our Minister of Budget and National Planning did a great job with his team.
“The minister became almost half his size during the time, working night and day to get the budget ready, only for some people to pad it.
“What he gave us was not what was finally being debated. It is very embarrassing and disappointing. We will not allow those who did it to go unpunished.”
The Link: https://economicconfidential.com/2016/11/budget-padding-continues/
Note: Economic Confidential is a sister publication of PRNigeria
PRNigeria encourages institutions to be transparent in their information management as it provides news items from authoritative sources for free use by the media