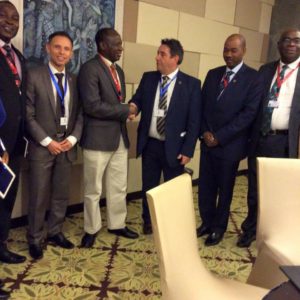 The meeting is usually held once in a year by one hundred and ninety countries, Interpol member nations and attended by Ministers of Security, Chiefs of Police and law enforcement agencies.  Accompanying the Inspector General of Police to this year General Assembly are the Comptroller General of Immigration Alhaji Mohammed Babandede, the Commissioner of Police Interpol, CP Subair Olusola, the director General, NDLEA, Alhaji Abdallah and the Interpol System Consultant, Chikwe Udensi.

The theme of this meeting is “setting a global roadmap for International Policing”. The issues of International security and how to extensively curb transnational organised crime were discussed. Also discussed were the disturbing trend of cybercrime, corruption, drug related offences, terrorism, foreign terrorist fighter [FTF] and exploring ways to check the funding of terrorism.

The IGP, who is an International Police Reforms Resource Person, headed a panel to discuss transnational organised crime.  He emphasised the challenges posed by systemic corruption and its negative effects in the fight against transnational organised crime.  He particularly pointed out how endemic corruption has considerable negative effect on the war against terrorism in Nigeria.

He sighted the commendable strides of the current administration is making in Nigeria to wage a comprehensive fight against corruption and improve the quality of lives of Nigerians.

The i-24/7 is expected to be connected to key law enforcements agencies in Nigeria e.g Immigration, Economic and Financial Crime Commission [EFCC], Airports, Seaports and all international borders.  However, currently the connectivity is restricted to the Police.  The IGP had a strategic meeting with the high command of the Interpol and discussed the general applicability of i-24/7 in Nigeria which will soon take off.

The IGP further had a crucial meeting with chiefs of Police in West Africa which resolved to revive the West African Police chiefs Committee [WAPCCO].  To this end, Nigeria will set up WAPCCO secretariat in the country and host the next general meeting of WAPCCO.