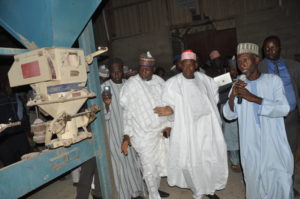 Following Kano state government’s renewed interest in agriculture, as part of efforts to diversify the local economy, the Rice produced by farmers in the state rose from 692, 481 tonnes in 2015 to 1, 551, 720 tonnes last year, reflecting an increase of about 95.2 percent.
The state governor, Dr. Abdullahi Umar Ganduje who announced this also said “Wheat production in the state increased from 9, 495, 024 tonnes in 2015 to 17, 717, 000 tonnes in 2016, showing a swell of 84 percent”.
The governor stated this during an Interactive Session on loan recovery with Farmers, on the Central Bank of Nigeria/Bank of Agriculture/Kano state Rice Anchor – Borrowers Programme, at Kano Seed Processing Center, Kadawa, Garun Malam Local Government area, on Saturday evening.
Governor Ganduje, who further revealed that the bumper harvest recorded last year in Kano showed a significant increase in the production of other commodities like maize, millet, groundnut and cow peas, expressing that with the government’s commitment, barring unanticipated developments, the output would be multiplied this year.
On impediments to the farmers’ productivity, the governor said: “I have noticed that there are two major issues in Anchor-Borrower Programme. Farmers are complaining that they are not getting the assistance at the time they need it, and that constituted a major problem. Secondly, those who are involved in the scheme (CBN and BOA) are complaining that farmers are not paying back what has been given to them”.
Consequently, he promised that these issues as well as that of availability of inputs would be addressed, between the government and the banks involved, to ensure that farmers get appropriate assistance and other required intervention duly.
The governor instantly directed that the supplier providing the government with fertilizer to provide the commodity the farmers from the following day (Sunday), assuring that anything the farmers need would be provided to them to ensure hitch free productivity.
However, Governor Ganduje urged beneficiaries of the CBN/BOA/Kano state Rice Anchor – Borrowers Programme to ensure that they repay the loan given them accordingly since it is a revolving facility that will pave way for other farmers to benefit, pointing out the state is poised to increase its rice production to about half of the country’s rice requirement this year.
He maintained that his administration would concentrate more on agriculture this year to ensure multiplication of farmers output, pointing out that the administration recognizes the fact that it must work hard to improve capacity of farmers and address the many factors that contribute to their minimal productivity.
“Economic realities have shown that Nigeria’s future prosperity depends on investment in our farmers, to enable them become well prepared to revamp food productivity as oil money is no longer coming in as usual”, the governor asserted.
Accordingly, he said the Federal government is doing everything possible to help farmers including professional services, agricultural inputs and concessional loans to enhance food security and reduce dependence on oil, whose price has crashed in the international market.
Earlier, the representative of Central Bank of Nigeria, AbdulKadir Ahmad said the guarantee given by the state government was behind the success of the programme, highlighting that N960 million was allocated to Kano farmers and each got N367, 000 worth of loan, in terms of seedlings, pesticides, allied agricultural inputs and cash.
The Chairman, Kano Anchor Borrower Recovery Team, Prof. Mahmud Ibrahim Daneji clarified that about 5,540 farmers benefited from the program and some have started paying back with farm produce, as agreed between the stakeholders, urging others to expedite repayment to avoid legal action against them.
Some of the farmers that spoke at the session, including Yusuf Babba Danagundi expressed satisfaction with the programme but complained that the support given to them were released belatedly and fertilizer was not readily available, among other things.
Salihu Tanko Yakasai DG Media & Communications Government House Kano