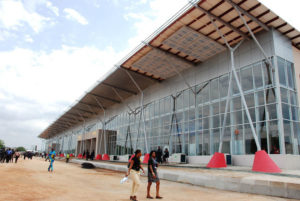 As part of the ongoing monitoring of the implementation of the 2016 Capital Projects, the Honourable Minister of State for Budget and National Planning, Zainab Ahmed Mrs, has visited Murtala Muhammad International Airport (MMIA), Lagos to inspect some projects under the Federal Airport Authority of Nigeria (FAAN).

The monitoring exercise which was designed by the Ministry of Budget and National Planning under the Ministry’s Quarterly Budget Performance Monitoring of 2016 Capital Budget, will culminate in the production of the quarterly report by the Monitoring and Evaluation Department of the ministry.

According to the Minister, the objectives of the monitoring exercise include; to assess the level of fund disbursement and utilization by the MDAs as at the third quarter of 2016, to examine status of projects implementation and their performance levels, and also assess the value for money for the levels of project implementation

Other objectives are; assessing the impact of executed projects on target beneficiaries and communities; and also Identify challenges and lessons learnt in the projects implementation

While speaking to the Journalists after the tour of the facilities, the Minister expressed satisfaction with what was provided by FAAN at the MMIA, especially at the arrival lounge, Airport’s Power House, upgrade of the Airport’s terminal building and the asphalt retracing works. She commended the level of completion