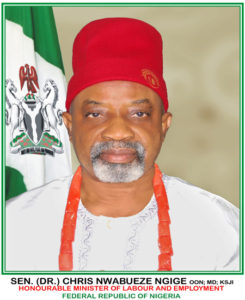 The Honourable Minister of Labour and Employment, Sen. Chris Nwabueze Ngige has reaffirmed the commitment of President Muhammadu Buhari led administration to the enhancement of the welfare of Nigerian workforce by ensuring that employers of labour at all levels comply with the Minimum Wage Act.
The Minister stated this today in his office when he received in audience the Secretary General of the International Trade Union Congress (ITUC), Sharon Baron.
In his words “Minimum wage is good, we are already working on it. We have a technical working committee in place and the current administration is poised to ensure that employers at all levels comply with this law by ensuring that everybody is carried along through the composition of an all inclusive committee.”
Speaking further, Ngige stated that although the current economic situation presents a daunting challenge, but the country has managed to mitigate its impact by reducing over dependence on oil production and venture into agriculture and solid minerals amongst others
“We have managed to survived this difficult time and learn our lesson by diversifying our economy into agriculture and reduced our over dependence on importation, we are now 80% self-reliant in rice production and other staple foods.” Ngige disclosed.
In addition, the Minister expressed the support of the Federal Government of Nigeria to the efforts of the International Labour Organization at combating slave labour in Qatar.
“You can count on our support in the fight against slave labour in Qatar, my Ministry and the Ministry of Foreign Affairs have addressed this matter leading to the proposed agreement between the Ministry of Labour and Employment and Qatar been put on hold in view of the wide report of unfair and slave labour practice in the Country.”
Ngige seized the occasion to inform the Secretary General of ITUC, that Nigeria had requested the International Labour Organisation (ILO) to upgrade its Country office in Nigeria and had also extended invitation to the Director-General of ILO Mr. Guy Ryder to pay a working visit to Nigeria.
Earlier in her remarks, the Secretary General of the International Trade Union Congress (ITUC), Sharon Baron applauded the stance of the Federal Government of Nigeria in the promotion of decent work, while requesting the support of the Nigerian Government in the fight against slave labour in Qatar.
Saying, “Nigeria has always been a strong government in defence of decent work and we need your support in this fight against slave labour as the government of Qatar run a system where the workers right are determined by the employers and not by the government even in the issues of minimum wage. We need your help to protect Nigerians in Qatar.”
Samuel Olowookere
Deputy Director (Press)