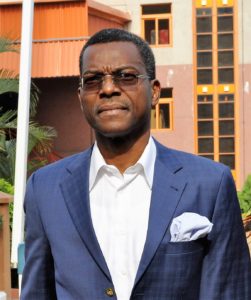 The Economic and Financial Crimes Commission, EFCC, on Tuesday February 7, 2017 arraigned a lawyer, Nze Chidi Duru, before Justice Peter Affen of the Federal Capital Territory High Court sitting in Maitama, Abuja on a 4-count charge bordering on criminal breach of trust to the tune of N16.2million.
Duru, a former vice chairman of First Guarantee Pension Limited, was said to have been entrusted with the said sum being part payment of thirty percent equity shares of First Guarantee Pension Limited sold to Novare Holdings Proprietary Limited.
According to the petitioner, the accused diverted the money to pay for land allocations from Lagos State Government in favour of Grand Towers Plc and MVJJDA Africa Limited, companies he allegedly have interest in.
The offence breaches Section 315 of the Penal Code Act Cap, 352 Laws of the Federation of Nigeria.
One of the counts reads: On arraignment, Duru pleaded ‘not guilty’ to the charges.
Counsel to the EFCC, Sylvanus Tahir, asked the court to fix a date for trial and remand the accused in prison custody pending trial.
But, Duru’s counsel, Abdul Mohammed, prayed the court to admit his client to bail adding that, the accused being a lawyer, would not jump bail.
Justice Affen granted bail to the accused on self recognition and ordered him to deposit his travel documents with the court.
Trial has been fixed for February 27, 2017.
Wilson Uwujaren
Head Media & Publicity