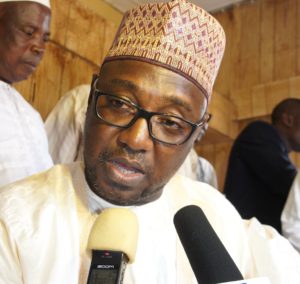 Niger State Governor, Alhaji Abubakar Sani Bello has appealed to the Federal Government to fix Minna Airport to save the country from impending national embarrassment.

He made the appeal when he led a team of political leaders from the state to pay a courtesy visit to the Senate President, Dr. Bukola Saraki, in his office in Abuja
The governor said he was in the Senate to seek for the support of the National Assembly for the completion of Minna-Suleja Road, the abandoned terminal wing of Minna Airport and the road network to Baro Inland Port by the Federal Government.
He observed that the fixing of Minna Airport, which requires less than N300 million would have given the country another alternative to Kaduna while offering airline operators an option pending when the rehabilitation works on Abuja airport is done.
The governor maintained that Niger State was not opposed to the selection of Kaduna airport, but noted that the Minna airport has more comparative advantages.
“Minna is a natural alternative to Nmandi Azikiwe International Airport, Abuja. It is nearer to Abuja and has a better run-way than Kaduna airport.
“With the controversies the selection of Kaduna airport is already generating with airline operators, we need to fix Minna airport, being the closest to the capital and give airline operators an alternative.
“From what I am seeing in the way we are handling the rehabilitation of of capital airport, if not carefully planed, we are heading for national embarrassment,” Gov. Sani Bello cautioned.
According to the governor, “The contractor handling the rehabilitation of Minna airport is on ground with all the equipment needed to complete the project. All he needs is less than N300 million. Our runway is one of the best and we are the closest to Abuja”.
He also solicited the support of the upper chamber of the National Assembly for the completion of work on Minna-Suleja Road which has made life unbearable for travellers and the construction of roads to the Baro Inland Port.
The Senate President, Bukola Saraki, threw his weight behind all the issues raised by Gov. Sani Bello, stressing that lack of options was responsible for the fire brigade approach of solving the Abuja airport challenge.
According to him,”It is true Minna airport is the closest and the runway in good condition. It is not good we limit ourselves to one airport as Mr. Governor has said”.
The Senate President agreed that the situation should be remedied but expressed concern that the much touted repair of the Nnamidi Azikiwe Airport was not even captured in either the 2016 or 2017 budget.
“Mr. Governor the issues of Minna-Suleja Road and the Baro Port are very critical, they are not only in the interest of Niger State but that of the nation and they require our support.
Jibrin Baba Ndace
Chief Press Secretary