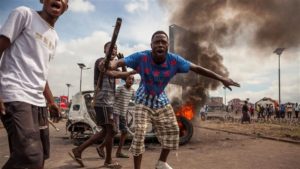 The General Officer Commanding (GOC) 82 Division Nigerian Army (NA), Major General Adamu Baba Abubakar, at the weekend, (Sunday February 12, 2017) visited to a scene of communal crisis, between Oku Iboko community of Itu Local Govt Area of Akwa Ibom State and Ikot Effiong neighbourhood in Odukpani Local Government Area of Cross Rivers State.The visit to the scene was aimed at seeing things for himself and unraveling the causes of the conflict, the damage and destruction committed by the warring parties and to consult with the traditional and religious leaders including youths of the areas, with the view to finding a lasting solution to the crisis.The GOC was conducted round the areas affected by the conflict, where a Police Out post, some houses, shops and vehicles were torched, burnt down or vandalized.Gen Abubakar also held a meeting with heads of security agencies and charged them to be more committed and proactive and not to allow a repeat of this obnoxious incident.“I was here on 21 January 2017, I am here again today for similar reason…this should not be allowed to happen again, we must show more commitment and concern and immediately evolve a workable solution to this perennial crisis that apparently requires more of a political than military solution” – the GOC stated.In a remark during the meeting, the Director State Security Services Cross Rivers State, observed that the problem is not that of failure of preemptive intelligence, but it seems, the commitment and required will is lacking and urged that there is the need for relevant authorities and other stakeholders to urgently address the lingering crisis.In his remarks, the Deputy Governor Akwa Ibom State, Mr Moses Ekpo MFR briefed the meeting on the causes of the conflict between the 2 warring communities. Mr Moses Ekpo wondered why people living together peacefully for decades will now resort to and embrace this tragedy.He further stated that “to us in Akwa Ibom State, it is a matter of great concern, as a government, we have done our part for talking to the other faction, with the view to dialogue and address the thorny issues. However, commensurate willingness from the other side appears to be lacking”… We had also arranged a meeting with the other side when the crisis erupted in December 2016 and in January 2017, but, received a message that it has been cancelled. He therefore appealed to the GOC to arrange a meeting of all stakeholders for us to resolve this matter. He thanked the GOC, the heads of security present and all the security personnel deployed to contain the crisis for their concern and extra sacrifices to the nation.

In a response, the GOC assured him he has instantly instructed commander 2 Brigade to liaise with the 2 states governments for an all inclusive stake holders meeting possibly on Saturday 19 February, 2017. The GOC made it clear that security agencies, particularly the NA, will attend the meeting only in observatory capacity.The GOC was accompanied on the visit by Commissioners of Police AKwa Ibom and Cross Rivers States Mr Don Awunah and Mohammed Hafiz respectively, as well as the State Directors of Security, for AKwa Ibom and Cross Rivers States.Signed SAGIR MUSAColonelDeputy Director Army Public Relations