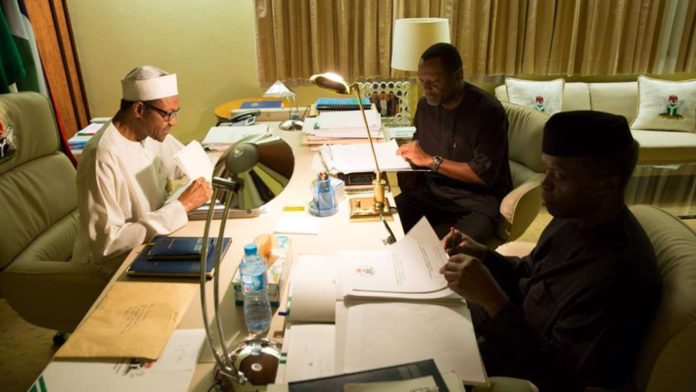 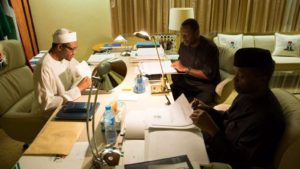 Barely one month to the implementation of the capital budget for 2016, several Ministries Departments and Agencies(MDAs) are yet to come to terms with the current economic recession by not implementing the capital budget to the letter and spirit of the 2016 Appropriation Act as passed by the National Assembly, Economic Confidential can report authoritatively.
Foremost among the Ministries is the Ministry of Budget and National Planning with the highest allocation of N1.14 trillion, having a capital vote of N404.86 billion and a recurrent expenditure of N142.40bn but nothing to show at the time of writing this report. Recall that the capital budget is more than the total budget for Agriculture, Health, Youth and Sports combined!
Facts reaching Economic Confidential reveals that the department of Monitoring and Evaluation of the ministry have been busy inspecting almost completed projects initiated by the Goodluck Jonathan administration, while those initiated by the current administration are yet to take off, says an official who pleaded anonymity, despite the fact that they were captured in the 2016 budget Act.
Other Ministries who have shown lackluster attitude to the implementation of the capital projects for 2016 budget are Ministry of Interior with a whopping N513.65 billion and N61.71bn for capital projects and a recurrent expenditure of N451.94bn.  As for Interior Ministry, no appreciable progress has been made as what goes on there is business as usual.
This is closely followed by the ministry of Education with N480.27bn, and a capital budget of N35.43bn and a recurrent expenditure of N444.84bn. Even though arrangements were made in the 2016 appropriation Act to settle the Academic Staff Union of Universities (ASUU), the respective federal government Universities are yet to receive such monies, thereby paving way for imminent industrial action by the universities lecturers, which had in the past paralyzed the educational system in the country.
The same cannot be said about the ministry of Power, Works and Housing as it has followed up with project initiation and implementation. With a budget of N456.93 billion for 2016 and a capital allocation of N422.96 bn, the ministry has embarked upon several projects, which if completed, would impact positively on the lives of Nigerians, notably the roads.
The Ministry of Defence is rated number five in the allocation of 2016 budget as it garnered a total of N443.07bn with a capital budget of N130.86 bn. The ministry has been grappling with projects in the three formations of the armed forces, namely the Army, Navy and the Air Force as the releases are not coming as and when due.
Health Ministry is number six in the allocation of budget for 2016 with N250bn. With the much mouthed taking care of maternal and child mortality, HIV/AIDS pandemic and Primary Health Care across the country, a capital allocation of N28.65billion was granted to the ministry.
Apart from the current rehabilitation of the Nnamdi Azikiwe International Airport, Abuja which had prompted the redirection of all flights to Kaduna, no meaningful projects have been embarked upon by the Ministry of Transportation. Meanwhile, a total budget of N202.34bn was allocated in 2016 with a capital expenditure of N188.67bn and a recurrent of N13.66bn. The Ministry becomes number seven in the highest allocation for 2016.
The office of the National Security Adviser where all security pools are hosted had a total budget of N88.87bn with a capital allocation of N32.08bn, becomes the number eight of all MDAs with a recurrent expenditure of N56.79bn. Findings equally show that no meaningful project has been embarked upon by the office as far as budget implementation is concerned.
Agriculture, Youth and Sports each have a budget of N75.97bn and N75.47bn respectively.  They are tagged numbers 9 and 10. While the capital allocation for Agric Ministry stands at N46.17bn, the youth and Sports counterpart has N4.66bn, with a recurrent of N70.81 bn.
The ministry that has the least allocation is Special Duties with N65 million for 2016 and designated at the Secretary to the Government of the Federation. It has no capital vote for 2016.
Economic Confidential recalls that the thrust of the 2016 budget was the recovery and revitalization of the economy to take it out of recession, but the activities of most MDAs are a far cry from what is envisaged.
Link: http://economicconfidential.com/2017/02/budget-2016-mdas-implementation/