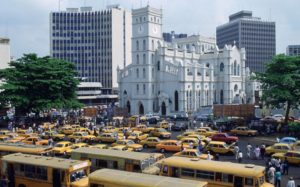 Lagos State Governor, Mr. Akinwunmi Ambode on Wednesday said that the State and the Province of Gauteng in South Africa both possess the capacity to drive the desired industrial and economic growth in the African continent.

Governor Ambode, who addressed Government House Correspondents shortly after a meeting with the Premier of the Province of Gauteng, Mr. David Makhura on a possible partnership on advancing trade and industrialization at the Lagos House in Ikeja, described both city-States as the economic powerhouse of both Nigeria and South Africa.

The Governor, who disclosed plans to enter into a bi-lateral relationship with the Province of Gauteng, aimed at boosting the economic capacities of not just Nigeria and South Africa, but the continent of Africa, said it would be a win-win situation that would grow the Gross Domestic Product (GDP) that would be beneficial to the citizen of both countries.

Disclosing that a Memorandum of Understanding (MoU) would be signed in Johannesburg, South-Africa by September 2017, Governor Ambode said the benefits of the partnership on the long run could not be over-emphasised.

He said, “The essence of this relationship is that between the Province of Gauteng and the State of Lagos, we actually have the powerhouse of commerce and the economy of the two countries so you can imagine a relationship that strives to bring that economic comparative advantage bloc force into a synergy. So, that’s where our focus is; the powerhouse in South Africa and the powerhouse in Nigeria coming together to now do something instructive and also constructive to the benefit of their own people. That’s the framework with which that MOU will be driven.

“We see this that it would not only increase the GDP as we start to operate together. It would also increase the benefit that would be derived by all the people that are confined in those communities. So, it’s all about commerce, it’s all about economy, things that relate to good governance, we are going to exchange human capacity, things that make us to learn from each other and also improve on the things that are challenging and common to both of us.”

Also speaking, the Premier of Gauteng, Mr. David Makhura who expressed optimism that the partnership would enhance the industrial capacity of Nigeria and South Africa, said that it was high time for both Lagos and Gauteng Province to rise to the challenge and utilise their strengths for the benefit of the continent.

“One of the important areas of the economy that we would focus is mainly manufacturing. Africa has to manufacture goods for Africans and we have rich natural resources in our continent, both in South Africa and Nigeria, the State of Lagos and the Province of Gauteng would like to build on our experiences and how we can enhance industrial capacity including building advanced manufacturing capabilities of our continent,” Makhura said.

Alluding to the fact that the African continent would be left behind if Nigeria and South Africa fail to step forward and drive industrial revolution, Makhura said that the responsibility was for Lagos State and the Province of Gauteng to lead from the front.

“We believe very strongly that Lagos State has got some industrial capacity that we can bring our business people together to check up that capacity. There is lot of innovation happening, the ICT industry, the creative industry, here in Nigeria and particularly in Lagos has got youths, professional services and financial business capacities and the economies are more or less compatible.

“So what the State of Lagos has in terms of sectors of the economy, we think if there is better synergy, better coordination, we can also look at how the two governments can support more inclusive growth,” he said.

Also speaking, the Special Adviser to Governor Ambode on Overseas Affairs and Investment, Professor Ademola Abass, said the partnership would look into the area of capacity building and possibly to exchange ideas and knowledge transfer between the two countries.