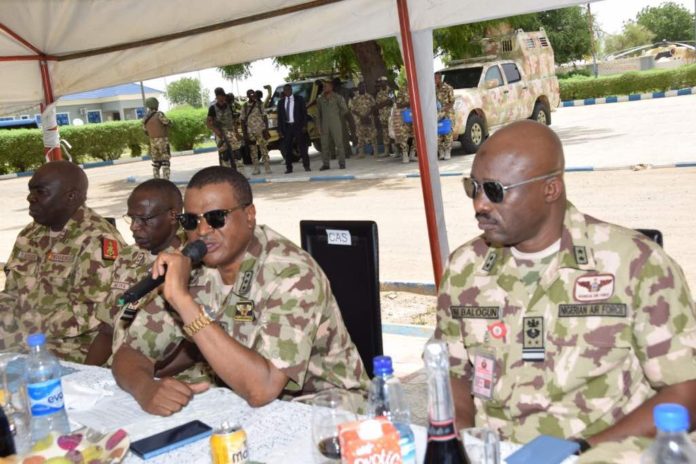 The Chief of the Air Staff (CAS), Air Marshal Sadique Abubakar, yesterday, 26 June 2017, feted with troops of the Nigerian Air Force (NAF), who are directly involved in the ongoing counterinsurgency operations in the North East. Earlier on in the day, the CAS, accompanied by other senior NAF officers, had breakfast with pilots, technicians as well as other members of the ground and administrative crews deployed in . Thereafter, the CAS and his entourage proceeded to Yola, where they had lunch with the NAF personnel serving in Yola as part of the counterinsurgency force.  According to the CAS, the main essence of the visits to the NAF troops in the North East was to celebrate with them on the occasion of Eid-el-Fitr as a way of sustaining their high morale.

While in Maiduguri, the CAS stated that the NAF leadership was mindful of the enormous sacrifices being made by the NAF personnel, who are unable to celebrate with their family members, especially during this festive season. In his address, Air Marshal Abubakar assured the personnel that the entire nation was behind them in the ongoing efforts to flush out the remnants of the Boko Haram insurgents. He then urged them to remain committed while also making the most judicious use of the nation’s resources entrusted in their care. He equally seized the opportunity to commend the NAF medical personnel that had been participating in NAF humanitarian interventions in various IDP camps in the North East. He expressed delight at the outcomes of the medical outreach programmes, which have proved to be an opportunity “to give hope to the hopeless”, he said.

At Yola, Air Marshal Abubakar commended the efforts of the personnel in the ongoing fight against insurgency. He added that the nation was proud of them and that the NAF would continue to do its best at ensuring their welfare. He then informed the personnel that the NAF had just completed the reactivation of one Do-228 aircraft, which would be used to reintroduce courier service in the NAF. In addition, the CAS revealed that the second NAF ATR-42 aircraft had been reactivated and would be used to regularly airlift the frontline troops to visit their families.

It is recalled that the Air Marshal has consistently feted with NAF frontline troops during all festive occasions since his assumption of duty as the CAS, a development which has continued to raise the morale of the personnel.