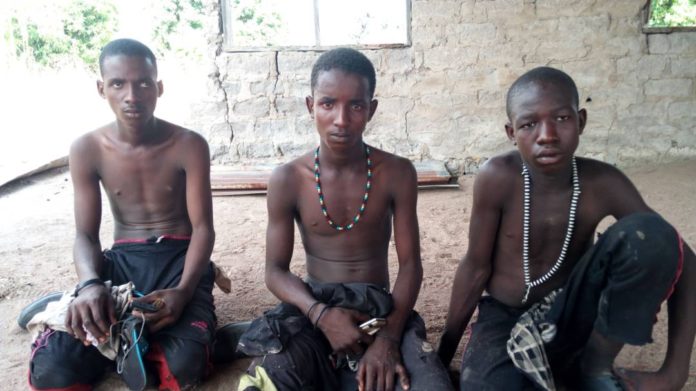 Troops Apprehend Young Herdsmen Destroying Farmlands in Benue
Exercises AYEM AKPATUMA (Cat Race) has continue to record tremendous success as herdsmen are being  arrested destroying farmlands and large number of weapons recovered in different locations  where the exercise is conducted.
Troops of Sub-Sector A, deployed at Yelwata while on routine patrol along road Gbajimba-Kaseyo-Awe in Benue State, arrested 4 herdsmen grazing in farmland on Wednesday 28 February 2018. Four cutlasses were recovered from the herdsmen.
Similarly,troops of Sub-Sector B deployed at Anyilamo while on fighting patrol along Buruku-Uba-Abeda-Ameh and Fadama Kuturu also in Benue State apprehended 3 herdsmen destroying farmland with their cattle on Wednesday 28 February 2018.
In a related development troops of Army Headquarters Special Force Team B of Command Army Record Lokoja, while on routine patrol on Tuesday 27 February 2018, along road Okene-Lokoja responded to a distress call of kidnappers operating along the road.
On arrival to the area troops encounter with the gangs and engaged them.   During the fire fight the kidnappers abandoned their location and flee into bush.According to information provided to troops the gangs were said to kidnapped one Alhaji Momoh on 18 February 2018.
Troops have dominated the area while trailing the kidnappers to rescue the abductee .
The Nigerian Army therefore requested law abiding citizens not to relent on their effort by providing  useful information to assist the Army and other security agencies in the successful conduct of exercise AYEM AKPATUMA.
You are please requested to disseminate this information to the general public through your reputable medium.
Brigadier General Texas Chukwu
Director Army Public Relations