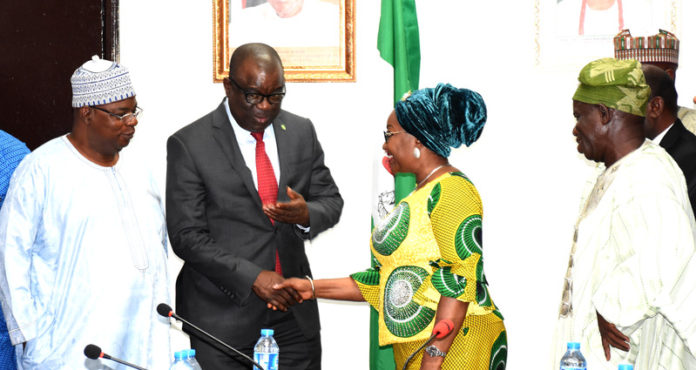 The Head of civil service of the Federation, Mrs. Winifred Oyo–Ita has reaffirmed the commitment of the Administration of President Muhammadu Buhari to workers welfare.

She made this assertion today when she led a team of Permanent Secretaries on a Peer Review Exercise to the Federal Ministry of Labour & Employment.

According to her, ‘’the Peer Review mechanism was a reactivation of a policy that was put in place by a previous Head of Service of the Federation and this was meant to bring together Permanent Secretaries, Directors of Ministries and Staff together to discuss their achievements, challenges and way forward for reviewed Ministries, and their Parastatals and Agencies’’.

Mrs. Winifred Oyo-Ita commended the Ministry of Labour and Employment for its out standing achievements in the area of settling industrial disputes and job creations, especially through Skills Acquisition Programmes saying ‘’ the National Directorate of Employment (NDE), and skills Development and Certification departments in the Ministry are doing a lot. She want them to now look into providing start-up capital to the trainees, after the training with which they are empowerment to stand on their own’’ she asserted.

Speaking further, Oyo-Ita advised the Ministry to take advantage of the funds available in the Central Bank of Nigeria (CBN) and the Bank of Industry to support multi-sectorial private citizen economic activities.

She urged the Ministry of Labour and Employment to put in more efforts towards addressing issues of Child Labour, workers welfare and the general work environment.

‘’You need to go back and put up a documentary on what you have done so far and what you can do if well-funded’’ she added.

The Permanent Secretary Federal Ministry of Labour and Employment, Bolaji Adebiyi in his presentation, said that he was happy that his Ministry was the first to be peer reviewed as the exercise in reactivated.

Going down memory lane, Adebiyi said that he was posted to the Ministry in August 2017, in the thick of strikes that were embarked upon by workers Union nationwide and which indeed was his a baptism of fire. He said today with the benefit of hindsight, it was really a blessing.

Adebiyi emphasized that experience, opened his eyes to the resolve of President Muhammadu Buhari’s government towards alleviating and an in instances removing the hardships of workers in the country

In his presentation, he highlighted the mandates and the responsibilities of various departments under the Ministry, this included joint Inspection of factories to enforce workers rights and welfare. He renewed efforts to review the laws governing labour administration and the inauguration of the labour councils and the efforts to ratify outstanding international conventions and protocols

In his vote of thanks, the Director Human Resources, Mr. Ajibola Ibrahim, appreciated the Head of service and the team of Permanent Secretaries for their visit and kind gesture to the Ministry of Labour & Employment Assuring them of the Ministry’s commitment to improving on the areas of shortfalls as highlighted by the Head of Service of the Federation.