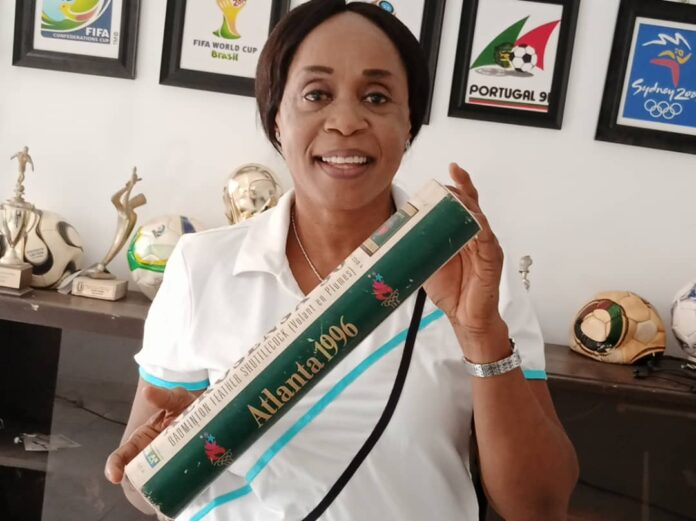 Minister hails Solaja on  Highest Badminton Award
The FG through the Youth and Sports Minister, Mr Sunday Dare has praised and commended Nigeria’s Olympian female Badminton player Mrs Obiageli Solaja, for receiving the highest award in the Continental Women Badminton, an annual award usually bestowed on outstanding African women badminton players by the Badminton Confederation of Africa ( BCA).
By this award, Mrs Obiageli Solaja becomes the second recipient of the 2019 African Women in Badminton following that of Gretha Prinsloo of South Africa, who received the 2018 award last year during the BCA Annual General Meeting in Nanning China.
While paying glowing tributes to the recipient’s enviable record as one of the first three Female badminton players in Africa to participate in the badminton event of the 1996 Atlanta; Mr Sunday Dare stressed that BCA’s honouring our amazon with the highest badminton award didnt come as a surprise; stating that it is an affirmation of the Nigerian spirit of excellence in any endeavour we committed ourselves.
Besides,and to buttress his assertion, the Minister similarly alluded to Mrs Solaja’s sporting laurels in the Africa Senior Championships in 1996, where she won three Gold medals in the Women’s Singles, Women’s Doubles and Mixed Doubles.
It is worthy to note that the Badminton Confederation of Africa ( BCA), which is the highest decision making body on Badminton in Africa; in its letter dated 18th April 2020; stated that Oby Solaja was selected for the award based on the success of the 2019 All Africa Senior Championship in April 2019 held in Portharcourt, Rivers State, Nigeria.
The BCA will bestow the honour to Mrs. Obiageli Solaja during its Annual General Meeting 2020 at a date to be fixed later due to the current COVID-19 global pandemic . The award is meant to ”celebrate outstanding women in Africa who have contributed to the development of badminton in Africa by demonstrating irreproachable attitude and dedication to the sport in their respective fields”.
Mr Ramon Balogun.
Asst. Director.
For: Director Press.