Mohammed Babagana Monguno is a retired two-star military general and the current National Security Adviser (NSA) to President Muhammadu Buhari. He was the Chief of Defence Intelligence Agency (DIA) from July 2009 to September 2011 and the Commander of the Brigade of Guards in charge of protecting the Presidential Villa from 2007 to 2009.

No one will question his outstanding military credentials and qualifications that informed his appointment to be the NSA to the President on July 13, 2015.

But, his tenure has been plagued by infighting within the top security echelon, he did not command the respect and loyalty of the Service Chiefs that were supposed to be answerable to him, there were turf wars and lack of synergy between all services of the armed forces and the intelligence agencies. He himself made all of these issues public in his words and writing.

This infighting between the leadership of the security agencies is largely responsible for the abysmal failure of this government to protect its citizens from Boko Haram insurgents in the NE, marauding bandits in the NW and NC, secessionist terrorists in the SE, xenophobic political thugs and anarchists in the SW and drug-crazed cultists and armed robbers in the SS that have turned this country into their killing fields.

Education in Northern Nigeria has never been more imperilled than now. In a short span of four months (Dec. – March), there have been abductions of students in four states (Katsina, Niger, Zamfara and Kaduna). More than 600 schools have been closed in the Northwest alone for fear of kidnappings by bandits. Many parents will take their children out of school with resultant explosion of out of school children, illiteracy, poverty, early marriage, increase in maternal and infant mortality, worsening insecurity and many other social problems.

I have followed the NSA closely in the last two years due to worsening insecurity particularly in the Northwest and central parts of the country. As the Administration’s point man on national security, he briefs the nation after each security council meeting which oftentimes happens after a massacre, a school abduction, riot or any of the many security challenges bedevilling this country.

The NSA’s press conferences are part fashion show, part demonstration of his mastery of the English language, full of excuses for the failures of this government to protect its citizens and a lot of unfulfilled promises. He is usually dressed immaculately in an ultimate bespoke suit from Savile Row with a beautiful silk tie and pocket handkerchief to match.

His most recent appearance was on March 2, 2021 after the release of 279 school girls abducted in Jangebe Zamfara State. He was visibly angry, speaking with a stern, high pitched voice, taking off his eye glasses, squinting his eyes, creasing the skin of his forehead and threatening fire and brimstone on those he called beneficiaries of insecurity in Nigeria who he said are on a government watch list.

General, going by what you said in your interview with BBC Hausa Service on Friday 12th March 2021 at 6:30am, the biggest beneficiaries of insecurity in Nigeria could very well be from within.

It is worth noting that on 14th Dec, 2017, the sum of one billion dollars ($1.0 billion) was approved for the purchase of arms, training and logistics for Nigerian military personnel. This money was to be withdrawn from the excess crude account which at that time had a total of two billion and three hundred million dollars ($2.3 billion) in it. All State Governors had to give their consent for this approval.

In his interview with BBC Hausa Service, the NSA answered questions on weapons procurement and national security. The BBC has a very loyal listener base of over 190 million worldwide. His choice of BBC Hausa Service might not have been accidental but strategic because it is no secret that President Buhari is an avid listener since his days as a young military officer. Even bandits in the forests listen to this station.

Gen. Monguno as is well known, is Kanuri from Monguno in Borno state but he speaks Hausa better than a native, in fact his Hausa is better than his Kanuri or English.

This is just to puncture any excuse that he misspoke due to poor understanding of Hausa language.

In the interview, he said that “It seems the money released to former Service Chiefs by President Buhari to buy weapons to fight terrorism, banditry and kidnapping, is missing. Because the new Service Chiefs have confirmed to us that they didn’t see where the new weapons were purchased in their handing over. Apparently, the money is missing, and we must investigate”.

This statement was a bombshell coming from no less a person than the NSA who at the beginning of this Administration was tasked with the responsibility of constituting a Presidential Panel to investigate similar infraction by the previous administration. His allegation has undoubtedly done an irreparable damage to this government’s anti corruption stance nationally and internationally.

Neither the lightning speed rebuttal from Garba Shehu, the Senior Special Assistant, Media and Publicity to the President nor the seemingly forced statement from the Office of the NSA trying to recant what the NSA had said, were convincing. If anything, both left more questions than answers. One of such simple question is, who should Nigerians believe on matters relating to weapons procurement, the NSA or the Media Adviser?

There is clear discordance between the NSA and the Presidency but, all Nigerians see and hear is that things just don’t add up.

What is most worrisome is the fact that the NSA is just now finding out that the weapons and money allocated for their purchase can not be accounted for. I wonder why he did not know much earlier and what part of our National Security has he been advising the President on for the past six years of his tenure as the NSA?

At a time when the nation is facing the worst insecurity of our lifetime and our gallant men and women in uniform are taking constant casualties in the many theatres of conflict all across the nation, it is disheartening to hear from the highest National Security leadership that funds meant for the purchase of weapons have been misappropriated. There is no way for this government to spin this or wiggle out of it. This is déjà vu all over again.

The National Assembly (NASS) can not absolve itself of blame on this recurring national nightmare. It is the job of the NASS to oversight the use of all funds it appropriates to all branches of government. If the NSA’s allegations turn out to be true, the relevant Committees of the NASS will have failed in their constitutional responsibilities.

The NSA’s revelation is a chilling confirmation that the former Chief of Army Staff, General Buratai knew something we didn’t know when in December 1, 2020, he was quoted to have said that “There is likelihood of terrorism persisting in Nigeria for another 20 years”.

With an empty armoury and treasury, it will be foolhardy to expect quick and successful resolution of insecurity in Nigeria.

1. The President should direct full investigation into this matter because it will remain an inescapable moral burden and a dark cloud on his Administration.

2. The NSA should honourably resign or else, the President should relieve him of his position.

3. The NASS should fully investigate its failings and the allegations labelled against the immediate past Service Chiefs.

4. Nigerians should demand for full investigations into this matter and resist any attempt to take money from the excess crude account or any other source in the guise of buying arms for the Military until the NSA’s allegations have been fully investigated. 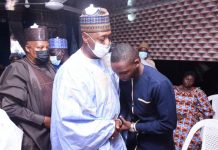 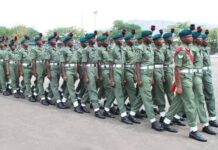 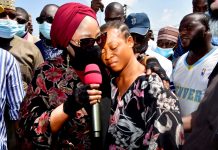 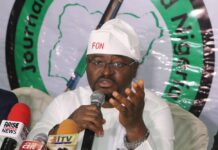 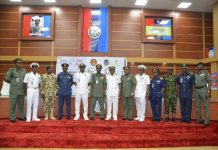