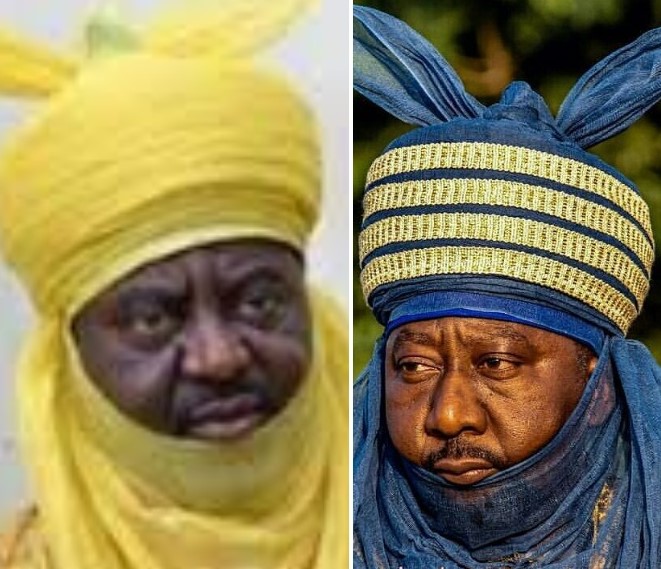 “I present this staff of office to his royal highness the Emir of Kano, Alhaji Aminu Ado Bayero as prescribed by law and tradition of the good people of Kano Emirate Council…in the name of Allah…” this were the words that marked the declaration and exchange of the symbolic staff of office, heralding the consolidation that marked His Royal Highness, Alhaji Aminu Ado Bayero’s ascension to the Kano throne as the 15th Emir of the Fulani lineage, 58yrs after his father’s reign.

It was all glamour, pomp, and pageantry on Saturday 3rd July 2021 at the Sani Abacha Stadium in Kofar Mata, Kano State, as top dignitaries, well-wishers, and spectators stormed the ancient city to witness HRH Alhaji Aminu Ado Bayero, formally receive his staff of office from the state governor, Abdullahi Umar Ganduje, 15 months after his appointment.

An official statement by the Governors spokesperson, Abba Anwar, confirms that over 100 Emirs and other traditional rulers from Nigeria and neighboring countries like Senegal, Chad, Cameroon, and Niger Republic attended the coronation where over 4,000 security personnel from different formations were said to have been deployed.

The entire environment was clothed in royalty as colourful robes, beautifully adorned horses, well decorated with glowing attires dotted the stadium, followed by an occasional memorable regal trumpeting, especially those announcing the arrival of the various traditional rulers who graced the occasion.

It was not only a rare and historic moment, but an illustrious one as the pulse across the ancient city of Kano gave out an enthusiastic feel by the people who are familiar with the legend that prophesised Emir Aminu’s rise to kingship.

“We have now been endowed with a King whose pedigree, humility and humanness has been attested to by all,” Mukhtar, a well-wisher, who attended the event told Royalty Eminence International Magazine.

Governor Ganduje had presented the staff, basking in the euphoria of the uncommon moment occasioned by the same chorus that has trailed the wake of Emir Aminu’s life and time from childhood, the “sai ka yi (you shall be)” chorus which is a legend that had now come through.

Earlier, there was a loud chanting of “Allahu Akbar! Allahu Akbar!!” as the King was being adorned with the legendary Ibrahim Dabo’s hat, bow and arrow as well as the traditional regalia from the Madakin Kano which was followed by the oath taking administered by the Chief Imam of Kano, Professor Sani Zahradeen.

“…I will rule with equity and justice, without fear, favor or hatred. So, help me God,” the ending part of the oath states as Emir Aminu repeated after the Chief Imam in Hausa language with his soft and piercing royal tone that melted the heart of the gathering as he stood majestically, downed in the 800yrs old heroic Ibrahim Dabo’s traditional ‘malafa’ (hat) which is being passed only from one generation of Emir to the other.

“Now the one who pities the masses has been appointed, the prince that choose an ordinary life over ostentation, may he grow in wisdom,” quipped one of the bystanders who was swept of by the spur of the moment.

Aminu Ado Bayero who is from the Fulani Sullubawa clan, ascended the throne on the 9th of March 2020, following the deposition of his nephew, Muhammad Sanusi II by Governor Ganduje. Aminu was first appointed to head Bichi before he was elevated to take over his fathers revered stool following Sanusi’s dethronement.

Nigeria’s President Muhammadu Buhari has extended “deep and wholehearted congratulations” to the Emir of Kano, Alhaji Aminu Ado Bayero over his ascension to the throne of his “fore-fathers as the 15th Fulani Emir of Kano from Sullubawa Clan, culminating in a well-deserved installation,” which took place on Saturday.

In a letter he sent to the Emir at his coronation ceremony, which was read and presented by the Chief of Staff to the President, Professor Ibrahim Gambari, who is an uncle to the new Emir, President Buhari said the Emir’s turbaning is providential because it is happening at a time in the history of our country, “when prevailing social and political conditions resonate with the ascension to the throne of my friend, your late father, the Emir of Kano, Alhaji Ado Bayero. May his soul Rest In Peace.”

“I remember with nostalgia, the passion and commitment he always exhibited in pursuit of any cause he believed in, a distinctive character that almost cost him his life prematurely on January 19th, 2013 because of his vociferous stand against Boko Haram terrorists,” said the President.

He expressed his belief in Aminu Ado Bayero, saying, “I have confidence that you would exhibit such leadership qualities and much more as you have demonstrated in the few months of your Emirship.”

The President prayed for the success of the Emir, saying he looked forward to his contributions to uplifting the people of Kano Emirate in particular and the nation in general, assuring him of his “total support for you to leave a sustainable legacy.”

Governor Ganduje Charges Emir on Unity Peace
Kano State Governor Abdullahi Umar Ganduje has charged the new Emir, Aminu Ado Bayero to make good use of his position to promote peace and unity, while warning him to constantly “distance himself from anything capable of tarnishing your revered position. I advise that you remain the father of all Kano people and not allow yourself to be used by self-centred persons.”

Ganduje, who described Aminu Ado Bayero as a man of the masses, urged the traditional ruler to ensure the development of his domain like his late father.

He thanked God who used him to appoint the Emir and rewrite the history of Kano by creating four additional Emirates, which, according to him, will go a long way in developing the entire state.

“This city of Kano is no ordinary city in both historical and modern times, Kano has always been revered as the major commercial and economic centre in Africa and the melting pot of diverse tribes and culture,” he said.

He added that it is only with the tolerant culture of the city that opposite ideas can co-exist peacefully “that you could have a thriving, free-market economy with several millionaires and yet also be the base for the radical left-centre of the political idea. This is, after all, the city of the socialist man of the masses, Malam Aminu Kano and is also the home of the capitalist richest man in Africa, Alhaji Aliko Dangote.”

Speaking in Hausa to the cheering of the crowd, the VP reiterated the popular saying of the people of Kano that “Kano ko da mai ka so, an fi ka”, which loosely translate as with whenever you arrive in Kano, the city or its people will surpass you.

To the emir, the VP said he must recognise that the privilege of emirship “comes with the obligation of preserving the rich tradition of a brotherhood of all tribes and tongues.

In his remark, Emir Aminu Ado-Bayero urged the people of Kano to respect constituted authorities and other leaders in the society.

The Emir also urged them to continue to pray for peace and unity in the country.

He then called on wealthy individuals to continue to support the poor in society.

The Emir promised to be fair and just to everyone in his domain, irrespective of their status in the society.

He also advised leaders to continue to fear God in all their dealings, saying that they would be asked to give account of their stewardship in the hereafter.

He pointed out that his being the Emir of Kano doesn’t mean he is better than others but it is the will of Allah.

“I inherited my forefathers, not because I am better than others, this is the will of Allah,” he said.

He also pledged to protect the rights of his subject to the best of his ability as the Emir of Kano in line with the legacy left behind by his father.

According to him, lack of autonomy to local government councils in the country has worsened the already fragile socioeconomic status of Nigerians.

He added that if local government become financially autonomous, the socioeconomic challenges being experienced will drastically reduce.

He expressed gratitude to Allah for making him with the Emir, who is like a son to him, ascend his fathers’ throne.

An Array of Dignitaries
Among the dignitaries that attended the occasion include Vice President Yemi Osinbajo; Senate Present, Ahmad Lawan; and Chief of Staff to the President, Prof. Ibrahim Gambari.

Also present at the Coronation ceremony were traditional rulers from across the country including the Sultan of Sokoto, Alhaji Sa’ad Abubakar III; Oni of Ife, Oba of Benin as well as Emirs from across Nigeria.

Furthermore, the delegation of the FG included ministers of Defense, Major General Bashir Magashi (Rtd), Agriculture and Rural Development, Sabo Nanono, Water Resources, Engineer Sulaiman Adamu, Aviation, Senator Hadi Sirika as well as the Senior Special Assistant to the President (Media and Publicity), Garba Shehu and Yusuf Buhari, the President’s son and soon to be son in-law of the Emirate.

Also present were representative of the President of Niger Republic, members of the diplomatic corps and captains of industries, including Alhaji Aminu Dantata, who also witnessed the coronation of late Emir Ado Bayero, some 58 years ago.