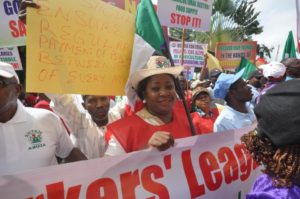 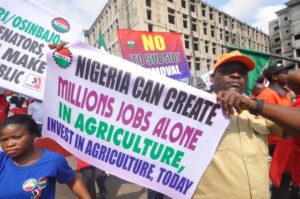 The Nigeria Labour movement today threw its weight behind Ibrahim Lamorde, Chairman of the Economic and Financial Crimes Commission, EFCC, expressing confidence in the anti-graft agency boss’ competence and commitment to the fight against corruption in Nigeria.
Affiliates of the two labour centre, the Nigeria Labour Congress and the Trade Union Congress, during a stopover at the Commission’s headquarters as part of an anti corruption rally in Abuja, urged Lamorde not to be distracted by recent attacks from corrupt elements who are hell-bent on undermining the EFCC’s efforts to tackle humongous corruption in Nigeria.
Issa Aremu, Vice President of the NLC in a short speech during the visit, urged the Lamorde not to be discouraged by the recent attacks by corrupt elements who are jittery about the Commission’s activities.
“I remember President Muhammadu Buhari saying that, if we don’t fight corruption, it will kill us.  We are here today to strengthen the work of EFCC. As a matter of fact, over the years, EFCC has done its best. As we all know, if you fight corruption, it fights back. I know in recent times, corruption seems to be fighting back. I can recollect that in 2003 when the ICPC, under Justice Mustapha Akanbi was doing a very good job to fight corruption, the National Assembly, suddenly, watered down the system.
‘‘The NLC and TUC stood up that time to defend the ICPC. So, I think we should commend both the NLC and TUC for standing up to join in the fight against corruption. We are witnessing almost the same thing now. I don’t know the details, but my brother, Lamorde, has done very well,” he said Speaking earlier, NLC President, Comrade Ayuba Wabba, said the rally was in support of the anti- corruption posture of the Muhammadu Buhari administration and the EFCC.
“We are demanding good governance, accountability and transparency, so that we can have enough to cater for the nation’s development,” he said.
Wabba, who advocated that all hands must be on deck to stamp out corruption from Nigeria, pledged the Union’s continued support to the current leadership of EFCC in its fight against corruption.
“We urge you to recover all stolen Nigerian monies and properties… Our prayer is that the laws must be reviewed to make penalty for offenders to include capital punishment. We need to stand in unison and fight this evil called corruption. We must kill it before it kills us all.’’
Comrade Wabba then presented a petition, containing the demands of the organized labour, to Lamorde for onward delivery to President Buhari.
In a short remark afterwards, Lamorde, stated that the war against corruption would be fought with relentless vigour. According to him, “I want to assure you that we are doing our best and will continue to do what we are doing, particularly as all the trade unions are behind us. I truly agree that the time is ripe for all Nigerians to speak with one voice because corruption has continued to slow down the pace of development in our country. We cannot afford to suffer this anymore. Other countries that gained independence about the time Nigeria did are far ahead of us today”.
He further stated that the only way by which the government could function properly was to block all the loopholes through which corruption is perpetrated.
”I can assure you that my colleagues and I will always partner with you in this fight against corruption,” he said.A similar rally also held in Kano, where the Head of Northwest Zonal Operation of the EFCC, Ishaq Salihu urged organized labour to partner with the EFCC to carry out its  mandate by acting as whistle blowers in any area where they find acts of corruption being perpetrated. 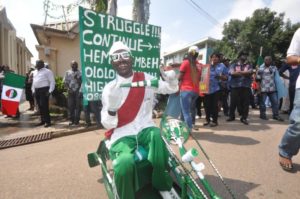 Wilson UwujarenHead, Media & Publicity
PRNigeria encourages institutions to be transparent in their information management as it provides news items from authoritative sources for free use by the media 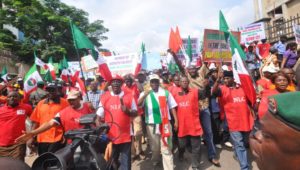 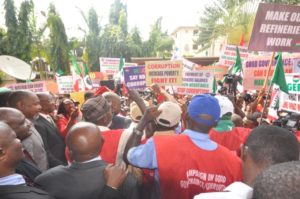