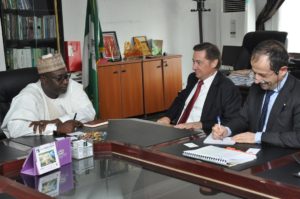 The Hon. Minister of Water Resources, Engr. Suleiman Adamu, FNSE, has called on France to join in the efforts of keeping the Lake Chad alive in order to guarantee the survival of over 40,000 people living within the Chad Basin.
The Hon. Minister made the call when the French Ambassador to Nigeria, Mr. Denys GAUER led French Development Agency (AFD) on a courtesy visit to the Minister in his office.
The Minister stated that Lake Chad, once one of Africa’s largest bodies of fresh water, has dramatically decreased in size due to climate change and human demand for water and if nothing is done to reverse this trend; the civilization within this axis would not be able to survive.
Lake Chad is now a ghost of its former self. Since 1963, the lake has shrunk to nearly a twentieth of its original size, due both to climatic straddling the borders of Chad, Niger and Cameroon in West Africa, Lake Chad has been a source of freshwater for irrigation projects in each of these countries.
The Minister noted that most of the surrounding countries around the lake are mostly French colonies. As AFD is a public development-finance institute that is working to fight poverty and support economic growth in developing counties and French overseas communities, AFD should consider coming to the aid of Lake Chad.
In his remarks, the French Ambassador to Nigeria, Mr. Denys GAUER, stated that France through AFD has been collaborating with Nigeria through the Ministry of Water Resources in co- financing of the implementation of the 2nd National Urban Water Sector Reform Project, sponsoring of PPP Training to the tune of 50,000 euro. He added that AFD has also approved a grant of about Euro 450,000 that is being utilized for feasibility study in some parts of the country.
On the issue of the Lake Chad, he said that all hands must be on deck in reviving the lake and with France interest in irrigation, the lake would once again become  a source of freshwater for irrigation projects.
M.E.Umoh (Mrs.)
Director Information & Public Relations
FMWR