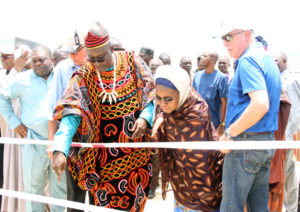 The Honourable Minister of Water Resources, Engr. Suleiman Adamu FNSE, has stated that the Kashimbilla multi-purpose dam project is one of the top priority projects to be completed under this present administration in the water sector.
The Minister stated this on Thursday 7th April, 2016 when he led a powerful Federal Government  delegation on inspection tour of the project in Takum Local Government Area of Taraba state.
Engr. Suleiman who was visiting the project for the first time since assumption of office as the Minister of Water Resources, said that the tour of water projects and facilities around the country which Kashimbilla dam is one, would afford him the opportunity to access the level of work done so as to put him in a proper perspective of the projects and focus on how to complete them.
“The purpose of our visit to this dam is a continuation of our projects tour all over the country, to see how they are doing in order to have a better focus”, he said. He added that with what he has seen, he is very impressed with the level of work done and the Federal Government through the Ministry of Water Resources would see to the timely completion of the project which he described as monumental.
He  noted that the water resources potentials of the area is enormous and its natural structure configuration is favourable for multi-purpose development such as water supply of 60,000 m per day, hydropower generation of 40mw and irrigation of 2,000 hectares of land.
Engr. Suleiman while charging the construction company to synchronize all the components of the dam for effective and quick relevance to the people, urged them to scale up the irrigation component above the 2,000 hectares in order to support the present administration’s agriculture agenda.
Kashimbilla dam was principally intended to check the threat of flood from the structurally weak volcanic Lake Nyos. However the Federal Government decided to maximize the enormous potentials of the dam project towards meeting development goals in power generation, water supply and large scale farming through irrigation. This led to the increase in the general scope of work on the project.
M. E Umoh
Director of Information & Public Relations
FMWR