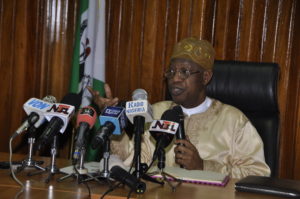 The Honourable Minister of Information and Culture, Alhaji Lai Mohammed has stated that members of the National Assembly are matured, competent and patriotic citizens who would not jeopardize or tarnish the image of the country by making laws that would warrant capital flight from Nigeria.
Alhaji Lai Mohammed revealed this, Monday, when he received in audience the Management of the Nigeria Liquefied Natural Gas (NLNG) who paid him a courtesy visit in Abuja.
Alhaji Lai Mohammed pledged the continuous protection of existing investors like the NLNG that has shown a successful model of what Public Private Partnership (PPP) can contribute to the growth of the Nigerian economy.
He assured that members of the National Assembly would not like to repeal an Act that could affect or disturb the operation of the Nigeria Liquefied Natural Gas Company.
He commended the Nigeria Liquefied Natural Gas for their immense contributions in the provision of amenities to some Nigerian Universities, Development of Human capacities, Creation of employment for the teeming youths and provision of awards of   literary prizes to deserving Nigerian authors.
The Minister charged the Management of the Nigeria Liquefied Natural Gas to partner with his Ministry in the National Re-orientation campaign “Change Begins with Me” scheduled for launch on Thursday, 8th September, 2016 aimed at re-orientating the mindset of the people to do what is good and needful.
Earlier, the Managing Director of Nigeria Liquefied Natural Gas (NLNG) Mr Tony Attah stated that “We have issues with the National Assembly which is looking to repeal the Act setting up the NLNG which is really the pillar on which the company stands”.
He said over five years, NLNG have contributed to the Nigerian economy and is still determined to boost the market and create employment opportunities to Nigerians.
AGBAGWA THEODORE
For AD (Press)

Technology, the Future of Automobiles and others

Insecurity in South East: Time for Igbo Youths to Synergize with Military to Restore Glory