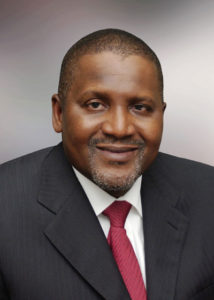 The Revenue Mobilization Allocation and Fiscal Commission has disagreed with Aliko Dangote on the sale of Nigerian Liquefied Natural Gas (NLNG) and other Federation Assets he proposed during an interview with a cable Television, the CNBC Africa as a way of augmenting the current revenue shortfall as a result of economic recession.
In a press statement signed by the Commission’s Acting Chairman, Shettima Umar Abba Gana, RMAFC argues that it would be unwise for the Federal Government to dispose of its crown jewels that generate Revenue and keep the Federation Account healthy over the long term.
Citing the NEITI 2013 audit and financial report of Nigeria’s oil and gas industry, RMAFC disclosed that the sum of $12.9 billion was received by NNPC from the Nigeria Liquefied Natural Gas (NLNG) Company over an eight-year period which the Corporation did not remit to the Federation Account. The audit according to the Commission also revealed that Nigeria Liquefied Natural Gas (NLNG) Company paid the sum of $1.289 billion as dividends for 2013.
“It is the considered view of the Commission that Nigeria’s Assets like NLNG and other strategic national resources should not be sold to meet short-term financial obligation”.
It would be recalled that Mr. Godwin Amefiele, Governor of the CBN indicated in a media report that the sum of $10bn would be realized from the sale of these Assets. The Commission is of the strong opinion that the same amount could be borrowed from the IMF and the revenue from these Assets could be used to amortize the loans over an agreed period. It should be noted that after the amortization of the loans, those Assets would still be owned by the Federation in addition to their regular dividends and Revenue.
The Commission advised that instead of selling off such vital assets which generate funds for the Federation, wealthy Nigerians should be encouraged to set up their own LNG projects, since Nigeria which ranks seventh in the world and first in Africa with natural gas reserves base totalling 188 trillion cubic feet (Tcf) as at May 1, 2015. In addition, Nigeria’s natural gas is regarded as one of the best in the world as it has low hydrogen sulphide (H2S) or carbon dioxide (CO2) impurity levels.
By PRNigeria